So You Want to Be a Good Bridesmaid?

So You Want to Be a Good Bridesmaid?

/
by Lsherrick
/
in Blog
/
Comments Closed 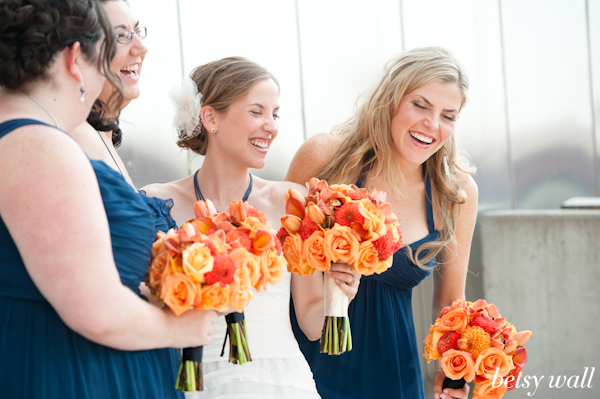 More than likely you will play the role of a bridesmaid in your lifetime.  The odds are pretty good this will happen given that marriage never goes out of style and everyone seems to be running to the altar….often more than once.  With any wedding there are many details, planning and effort made behind the scenes that most people don’t get to see.  One of the most entertaining rituals is the session of hair and makeup for the bride and bridal party.   Every wedding party has a unique dynamic and things are never dull when you combine 15 women into a hotel room just hours before a wedding.  Working in a bridal agency, people always ask me about diva brides. In my experience it’s not the brides that cause the drama, but rather the bridesmaids!  Here are some things to avoid if you ever want to be considered a good bridesmaid.

Don’t complain the getting ready time is too early!   The hair and makeup stylists have been hired to join the wedding party at the hotel to give everyone the celebrity treatment.   The bride has selected a ten a.m. ceremony time therefore, the hair and makeup needs to happen at seven a.m. to achieve this.  No one wants to wake up early on a Saturday if they can help it but it’s really selfish to complain since this is someone else’s “special day.”   Typically, the bride will go last in hair and makeup services on the wedding day to preserve her look for the day.  On one occasion, two bridesmaids complained they didn’t want to get out of bed because it was too early, making the bride go first. This was frowned upon by the others but no one spoke up.  These two bridesmaids even threatened to not be in the wedding party if they had to go first.  It was shocking to witness and even more disappointing since one of the girls was the sister of the bride.
A huge thing to avoid is leaving the hotel room when your time arrives to get your hair done.  Imagine the schedule has been written for hair and makeup services and five minutes before your time you leave the room and drive to the store to go shopping?  Now the stylists are waiting for you and it throws the sequence off and stresses out the bride who has to call and track you down!  And to further complicate the situation, when this happened at a wedding recently, the bridesmaid was from out of state and became lost due to not knowing the geography.   At a different wedding, a bridesmaid was an hour late because she didn’t account for the distance she needed to travel to arrive on time.  She walked in twenty minutes before the bride wanted to start pictures and didn’t apologize. The wedding stylists were ready to pack up and leave as everyone had given up on this bridesmaid making it there.  Once inside, she sauntered in and casually said hello to people as though she had time to spare!  You could see the tension on the bride’s face but she seemingly remained calm. Kudos to her!
Coming to the “getting ready” session with a load of drama is also not the way to behave. Again, this is the bride’s day. She has put a lot of planning and preparation into the wedding plans and is counting on her carefully selected bridesmaids to ease her nerves and soothe her jitters, not compound them.   I think many bridesmaids forget that it’s not about their needs first and foremost, but instead it’s about the bride.  The worst incident of this involved a bridesmaid that kept mentioning how marriage always goes down the same path and was perhaps being antagonistic due to a fight she had just had with her husband.  It’s as though the cheery vibe that permiated through the air had been sucked out of the room by her negative energy.   She kept on with her gloomy stories and anger until someone turned up the music and drowned her out.
Topping the list of  bad behavior is the ill-prepared bridesmaid.  This story is rather unbelievable, but it really happened.  Having not made time earlier in the week for personal grooming, this bridesmaid decided to bleach her arm hair in between getting her hair and makeup done.  People were coming and going from the hotel room including family members, caterers, photographers and stylists.  It was hectic. She slathered her arms with a hair bleaching agent and ended up getting it on several of the bridesmaids dresses.  This lightened the area on the dresses and if you looked in certain lighting was very noticeable.  She also ended up getting it on the couch where the mother of the groom ended up sitting.  Luckily the groom’s mother was just in her yoga pants, not her dress, but it was still highly unsuitable for the occasion.
Lastly, if the bride has certain hair or makeup instructions she wants her bridal party to follow, don’t deviate from the plan just because you prefer something different.  She has chosen the look she wants for her wedding day. The day is hers and the wedding pictures are memories she will look at forever.  It’s the most common of the etiquette faux pas. One bridesmaid even made it known to the entire group that she hated her hair up and didn’t want to feel ugly by obliging the bride’s request.  This put the wedding stylist in an uncomfortable position and made everyone feel awkward.  It’s just one day to a bridesmaid, but it’s the day a bride has looked forward to her whole life.  It’s a privilege to be a bridesmaid and it’s seemingly clear some girls don’t know how to be a good one.   But avoiding the aforementioned atrocious conduct and you are well on your way to becoming a good bridesmaid!
Lori Sherrick is a marketing manager at a bridal agency and wedding stylist. She has the privilege to write copy for the wedding industry and be a part of a bride’s momentous day.
Tags :
Bridesmaid